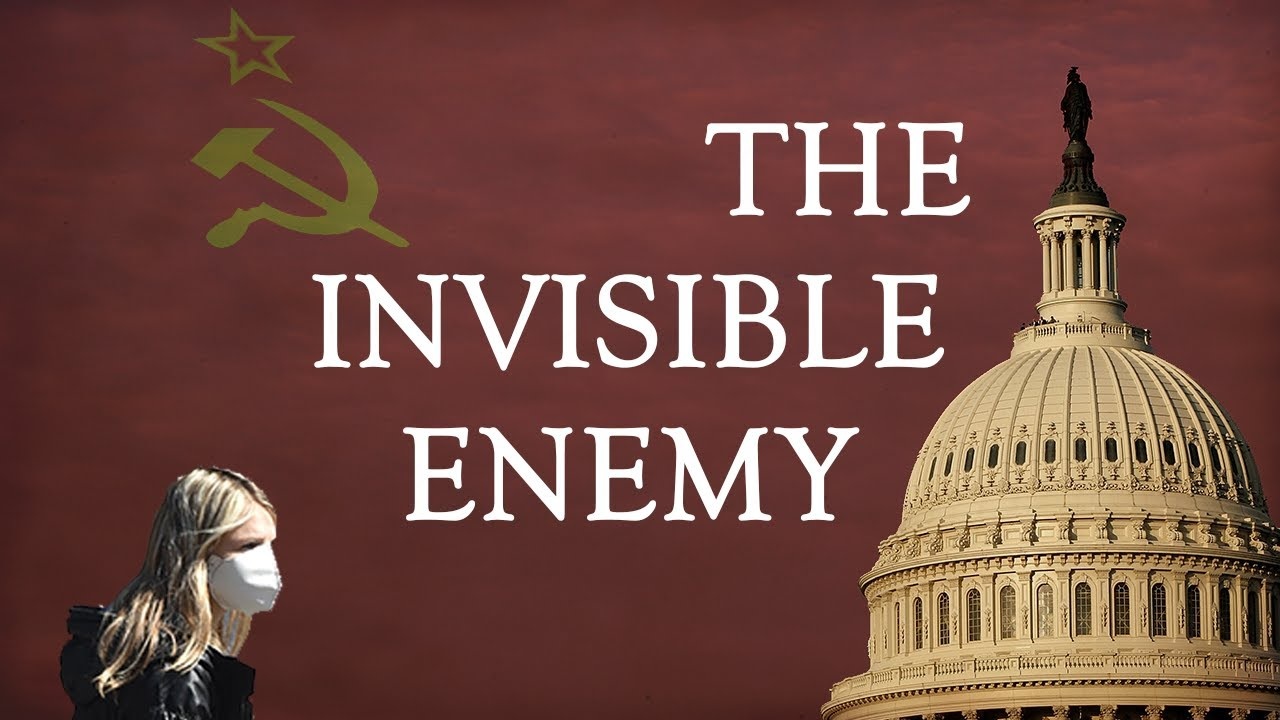 "This was a sneak attack, like a thief in the night."

"A great battle, against an invisible enemy."

"We will win and declare a great victory for our country."

All of these are direct quotes from President Donald Trump, all uttered since March 1st of this year.

And of course, all of them ring decidedly true and make perfect sense. Even Trump's most ardent opponents have referred to the current situation in which America finds itself as a once in a generation emergency, and that we should be on a wartime footing. They've called for more and more power to be handed to, no, more explicitly they've called for more power to be taken by the President to do battle against "The Invisible Enemy," everything from commandeering manufacturing plants to logistics and shipping companies to pharmaceutical manufacturing and research, to nationalizing the banking sector and all mortgages.

On the other hand, the President has preferred to form a partnership with private industries to wage the war. Turning to America's great companies to produce masks, respirators, ventilators, medicine and vaccines that will ensure our country can and will prevail.

The United States – and the entire world – is engaged in a great battle, against an unseen enemy. An enemy that threatens to kill our people and destroy our nation and our way of life. It's an enemy that we have seen and fought before, as a people. We have faced this enemy throughout human history, over and over we've had to battle it. All of us are descendants of survivors of the countless previous wars that humanity has had to fight against this hidden enemy of man.

The enemy is not SARS-CoV-2, Coronavirus.

No, the virus we're battling against is Slavery.

Call it what you want. Socialism. Collectivism. Communism. Statism. Despotism. A one-world government. Those are all forms of the same thing: some people's individual liberty captured for the betterment and benefit of others. All of those are forms of enslaving some men to the will and needs of others.

A virus is a biological construct. It's a biological disease caused by a virus, an unliving, unthinking sliver of organic material and takes over cells to turn them into factories that produce more viral particles to take over more cells until, ultimately, the host is killed. Doing battle against a virus requires treating both the symptoms caused by infection as well as finding a vaccine that can destroy the virus itself.

But slavery is a political and moral construct. It's a social disease caused by an immoral idea, spread by unthinking, unfeeling human beings who transmit the disease to others turning them into factories that produce more unthinking, unfeeling human beings. They take over the lives of more and more people within a society or a country until that country is destroyed. Doing battle against slavery requires treating both the symptoms caused by the infection within a society as well as finding a cure that can destroy the idea itself.

But this is not a war against a coronavirus. That's child's play. Terrible though it may be and despite the thousands of lives we may lose to COVID-19, it's relatively straightforward how to defeat it. Prevent the spread, find a cure. And we will. America and the world will survive this pandemic as it has survived a million others in our past. Each of us is the descendent of survivors of a thousand biological plagues.

The President rightly stated, we cannot let the cure for COVID-19 be worse than the disease itself. And he has the right idea in terms of the outcome here: we can't let our response to coronavirus destroy the American economy.

But saving the American economy isn't really the objective. A healthy, productive American economy that enables people to generate wealth and accumulate things is a consequence, an outcome, it's not a cause in itself. What has enabled the American economy to be the most robust and powerful engine for human ingenuity, productivity and wealth generation in world history is individual liberty? Men free to think and build, to seek new achievements and to be rewarded for doing so, to collaborate with each other, to challenge and compete with each other, driving each other to be smarter, to work harder, to find the better way to solve problems.

That is America. That is the battle we're in, what we're fighting to save. Beating COVID-19 is easy, it's only a matter of time. This particular virus may be new to us, but we know the formula for its defeat, much like the long-march to destroy the NAZI war machine in World War II, the writing was on the wall long before Berlin fell. Germany's defeat was inevitable once America entered the war. So too, the defeat of SARS-CoV-2 is already a foregone conclusion, the application of human ingenuity and thousands of years of human inventiveness and knowledge ensures our ultimate victory over this latest scourge.

But that is not the great threat. If the cure for COVID-19 is the slavery of some men for the benefit and betterment of others, then perhaps it would be better for COVID-19 to take us all. If the cost of defeating the biological virus is that we succumb to the political and moral disease of collectivism, then Trump's fear will have been proved right and the cure will have been worse than the disease.

Look at what's being proposed here. In the US, the government should take over every major industry, from healthcare and pharmaceutical companies to grocery and food delivery to airlines to shipping and transportation. Construction, take it over! Banking system, take it over! Stock market, take it over!

Ostensibly designed to fight COVID-19, but made permanent to enable the UN to fight future pandemics, as well as the ongoing pandemic of Climate Change…oh, and Poverty and Income Inequality, and sexism and nationalism and a thousand other isms they believe are unfair.

The United States is less than 5% of the World's population, but we represent over 25% of the world's GDP. So, the UN is effectively proposing that about 4% of the population transfer 10% of our wealth each year to support the remaining 96% of the human race, including supporting countries who are our enemies and who seek our very destruction.

What is proposed here is nothing short of the permanent enslavement of the United States for the betterment and benefit of every other national on earth.

There is no doubt the human race will survive COVID-19. Human beings have survived a thousand similar pandemics with barely more than a blip in our progress as a species.

But the plague of collectivism, the idea that some men should be slaves to others, that some people have some sort of right to lay claim to the intellect and productive energy of others, that is the real battle. That is the true invisible enemy that we must yet again defeat.

Ask yourself, would you have some right to charge into Mike Lindell's My Pillow bedding factory and point a gun at him and his workers to force them to produce cotton face masks to avoid being shot? No, of course the idea sounds preposterous and all rational thinking human beings would clearly see that as an immoral, criminal act. And yet many people are proposing that we do exactly that, just the gunman wears a blue UN Helmet or carries a US Marshall's badge.

Alternatively, does Mike Lindell have the right to choose to convert his factory over to making cotton face masks, at his own expense and to pay his workers to make those masks instead of making pillows? Yes, that is moral, that is a human being engaged in activity that he believes to be virtuous and right and, yes, for the love of all that is holy — profitable.

Just as with COVID-19, the defeat of all forms of slavery should be an inevitability. And yet from every corner of our country, the call is for the forced enslavement of some people for the benefit of others.

President Trump has this right. We cannot let the cure for COVID-19 come at the cost of our economy. And if that is the objective, then it is our original principles: individual liberty, freedom of movement and speech, that is what must be defended. That is how we protect and restore our economy and our country. That is how we ensure that our children's children will also be descendants of survivors of plagues and pandemics, whether they are the biological - or the moral kind.

UPDATE: Here's how the discussion went on radio. Watch the video below.